I’ve just returned from a trip to the East Coast. It was a fun and tiring trip. I spent the first week in Virginia with my sister and her family. We celebrated my nephew’s 4th birthday with a party of his friends and their families at a private airport with a public diner. One of the pilots who keeps his plane in an on-site hangar had small planes that were the right size for 4-year-old children to pedal around in. The pilot also let us sit in the plane he built. It was a fun day. 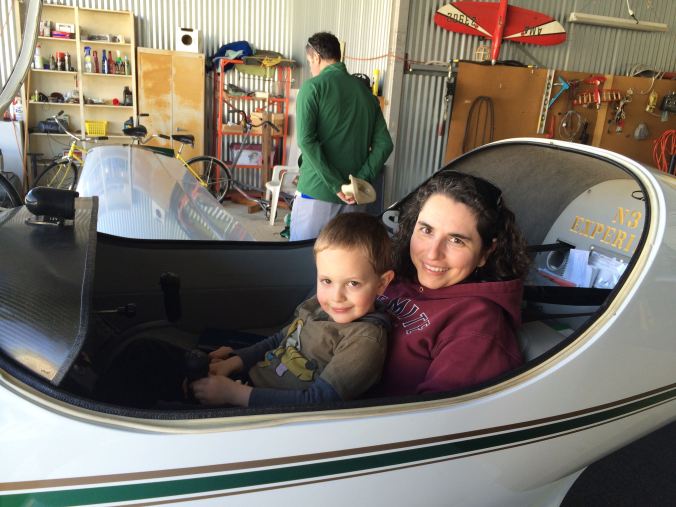 That was just one of the many things we did during my trip. I spent a lot of time playing with my niece and nephew. They had me wrapped around their little fingers, getting me to tell them stories, make faces, give them stinky things to smell (my supplements!), carry them around and do all sorts of other nonsense that made them, and me, giggle.

From there, I got on a train to NYC: a 7+ hour journey. It was an unanticipated extension of my trip, added on only a day before I left California. My father ended up in the hospital with a minor problem that was fixed by changing his blood pressure medication. But like all hospital stays for the elderly, it made him weak from not being able to walk around for five days. By the time I got there, he was in a rehab facility, building up his leg muscles again. He’s doing quite well. In fact, he is more alert and vibrant than he was when I last saw him at Christmas.

The big part of this trip for me was that I did a lot on my own. I took a flight that required a lay-over with a hike across the airport in Charlotte. I joked with another passenger that getting from one terminal to another was like training for a half marathon. Yet, I was able to walk it without assistance. I felt pretty tired after the trip, but I wasn’t worn to the bone, the way I’ve been in the past.

The train ride was another part of the trip that had a momentous quality to it. I took the train from MetroPark, NJ in 2007, when I was on my steep decline. I had to get assistance onto the train and off at Penn Station, where I got assistance to get in a cab. I was weak and woozy. At the time, it felt like quite an accomplishment to go anywhere. I was still in denial about how bad things were getting, with progressive weakness and weight loss, and coupled with increasing pain and and reduced neurological control. I was a mess but I was fighting it.

This time, I took the train for a much longer distance. I waved at MetroPark as we left the station. I took a subway train to Jackson Heights and walked to my parents’ apartment. It wasn’t all perfect, I had some problems being in the subway (which I’ll explore in the next post), but I could manage it. Then after resting for a bit and having dinner with my mother, I was able to walk to see my father at the rehab center six blocks away.

I felt triumphant and independent. This was the first time in eight years that I felt more like my mother’s equal, helping her at least as much as she was helping me.

On a totally separate topic, I had some time to think while I was away. I didn’t do much else for myself, instead letting myself go swimming in the lives of my family members. In the quiet moments, I thought about the neurological infection that has been my experience of Bartonella.

One of my goals in blogging about my experience with a coil machine is to separate out the symptoms that are associated with each of the infections I have. I like to have lists of the body systems affected by each infection with the corresponding symptoms, as well as a clear description of the herx that results from killing each infection.

In many ways, I have been successful. Then I get stumped by certain overlapping symptoms, ones that seem to be triggered by multiple infections. Examples include the joint problems in my left shoulder, the pain in my hands (that feels like it’s in my joints, but might be neurological in nature), and the innumerable bowel symptoms.

I stopped taking co-enzyme Q-10 at the beginning of the trip. I expected to have some Bartonella symptoms, but what I got was a combination of Bartonella and Lyme symptoms. I was more tired and felt a lot more pain and cardiac symptoms than I expected. It was rough. (More on this experience in the next post.)

What it made me realize is that the two infections might not, in fact, operate independently of each other. As I was thinking about this idea, that when the Lyme gets more active it might trigger Bartonella activity, or vice versa, I came upon an article about Babesia. The conclusion of a recent study is that ticks are more likely to acquire Babesia when feeding upon a rodent that has both Babesia and Lyme infections than when feeding upon a rodent that has only a Babesia infection.

It made me wonder if what I see as I reduce the load of Bartonella is a resurgence of Lyme, that by peeling back a layer of one infection, I might then expose another layer of the other infection. When I consider that possibility, I feel less concerned about additional relapses of Lyme (and, frankly, Babesia) while I’m whittling away at the Bartonella infection.

I’m not sure of the exact synergies of the three infections. I know that having all three run out of control in my body made me incredibly ill and unable to do much of anything. I know, also, that it has been very difficult to get any one of them into a permanent remission. I sometimes feel like I’m playing whack-a-mole, with old symptoms reappearing when I get other symptoms under control.

All in all, however, I’ve made a lot of progress. I’m able to do more than before. I’m not out of the woods. I have not conquered the infections to the point where I could call myself asymptomatic. But I’ve regained a certain amount of independence. In fact, I’ve gained enough strength and wherewithal that my family can now depend on me just as much as I depend on them.