I’ve been feeling very urgent since the weekend. I’m so tired of coiling. I just wanted to stop. I forced myself to continue until today, when the Alfons Ven Lyme Package arrived.

Technically, this blog is going to switch to reporting on the Alfons Ven remedies for Lyme, but it turns out, I may need to do a little more coiling on the side to help with the detox process. I’ll get to that shortly. First a quick report on the regular coiling I’ve been doing.

Bartonella and the Flare Problem

For about two weeks, I’ve been coiling three times a day for Bartonella. The main coiling protocol was 8 minutes on my spine in three places (to cover the whole thing), the back of my head, and each shoulder knob, twice a day. Then the third coiling session, I coiled the rest of my head, 8 minutes each on each side and the top, plus five minutes on my left heel (which has been the source of a lot of pain and restricted walking).

I had some herxing signs, kidney pain, acne on my butt, urinary hesitation, tension headaches, and tingling in my arms. So I guess there was a good reason to add in the rest of my head to the treatment.

The January Lyme flare is not receding, even with coiling every three days since it started around January 23. It gets so frustrating. Even though the symptoms are relatively mild, mostly in my joints, with periods of brain fog, I feel like I just can’t get to the end.

Then I started having the early symptoms of a Babesia flare (something which has repeatedly happened when Lyme stays active for too long despite coiling). These symptoms included: headaches with eye pain, tiredness with the need to lie down, night sweats, and insomnia of the type that I can’t fall asleep at bedtime.

I feel like I’m back at stage one, even though this is not nearly as bad as it’s been in the past. The problem is merely that it is recurring, again and again and again.

Thus, I couldn’t wait for the new treatment to come in because I want to try something that will get me to the endpoint.

My coil machine is ready to die. Or more specifically, the amplifier is on the fritz. I’m hoping to eke out a few more months of coiling for 5-10 minutes a day, purely for detoxing (which I’ve never done before), until I get to the end of the Alfons Ven remedies.

I desperately want some magic. I want a guarantee that this next treatment will work, that I’ll finally be well. I’m tired of getting incrementally better. 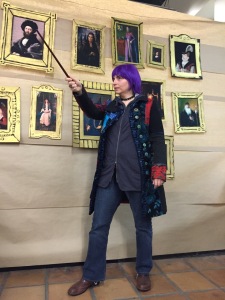 If only I could cast a healing spell on myself. Here I’m dressed as Auror Nymphadora Tonks, from Harry Potter, at a local bookstore event.

I can tell how much I’ve felt like I’m in transition. The urgency to get started on something new has been driving me to distraction since I ordered the remedy. I started an online writing class this week, giving me something else to work on, with deadlines, no less. I want to be out and about, walking and doing yoga and moving all the little stuck things that happen when I’ve been sick or away for an extended time. I’m ready for something new!

I took my first pill this morning. Although the Alfons Ven instructions for their Lyme Package say to start with CHIM, I’m following the instructions at a different website that the Alfonse Ven company suggests. I started with one dose of FLUOX, which is a detoxifying agent.

Nothing happened for about two hours. Then I got a headache and pain in the tops of my forearms. Then I desperately needed a nap. I slept peacefully for two hours. Since I woke up, I’ve felt mentally energetic and physically okay until about 9pm. Then I started to get a moderate headache, kidney pain and some pain in my ribs.

If all goes well, I’ll take two doses of FLUOX tomorrow. If I can handle that, then I’ll proceed to the next step. If not, then I’ll take FLUOX for a while until I’m ready to start the other remedy, CHIM, which helps to eradicate the infections.

I can’t really tell if anything is going on from the FLUOX or if I’m just having symptoms of the infections. I’m going slowly, just in case. It helps that I’m not as afraid as I used to be when I’m not doing a strong treatment and the symptoms are creeping up.

It’s a strange new world, post coiling. I have a lot more time on my hands.