The past week or so, I’ve been feeling lethargic and unmotivated. I feel like I’ve stepped into a zone where I need to try something new in order to make progress in healing. On the agenda was triggering Lyme with a vaccine that I need to get anyway. When that didn’t work, I decided it was time to test out a new frequency. 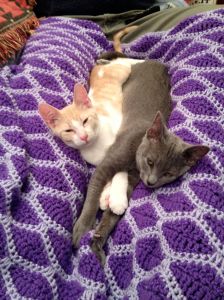 But first, a little fun news. My husband and I adopted cats last Thursday. Mario and Luigi, two fun little kittens who are shaking things up around here. They (mostly) sleep at night in their preferred location between us humans. They run around and play. But when we sit still, they join us for some lap-napping.

I’ve continued to coil for Bartonella and Babesia every day. The Babesia night sweats petered out until two nights ago when they finally stopped. I no longer have obvious Babesia symptoms. I plan to keep coiling for Babesia for another 2-3 weeks, to make sure the flare is gone…unless the symptoms return after my next vaccine.

Bartonella symptoms continue to diminish. The tingling in my limbs gradually disappeared, and I haven’t felt it in about 4 days. I still show signs of Bartonella herxes, particularly constipation (or difficult passages) and perpetually renewing acne on my butt. Otherwise, I seem okay.

Last week, I kept meaning to coil for Lyme and not getting to it. There were things going on every day, not giving me the opportunity to squeeze in 4 coiling sessions in a single day. I decided on Thursday night to wait until Saturday, when I would take my first rabies vaccine dose. One expected possibility was a flare of Lyme symptoms. That didn’t happen, but I was feeling pretty down and out on Thursday, Friday and Saturday. After I coiled on Saturday, I felt better. I’ve been feeling a little better since then, but I had no herx. It might be (fingers crossed) that the Lyme is at a low enough level, when I don’t triggered it, to cause a herx that is so small it is below my level of awareness.

Since the vaccine didn’t trigger a Lyme flare, I decided to try out a few other frequencies this week, to see if any of them caused any symptoms or made me feel better. In the meantime, I have another vaccine scheduled for this Saturday. That’s when I will next coil for Lyme.

This summer, my husband and I want to go on a trip outside the country, possibly camping. We have a destination in mind, but it isn’t set in stone. It depends on how well I’m doing. In preparation for the trip, we needed to be vaccinated for two infections: rabies and typhoid. What a world we live in. I have a slow burn illness that doesn’t kill but can take years off a person’s life, like it has done to me, but there are way worse, fast killers out there in other parts of the world. Rabies is 100% fatal if the infection takes hold. We’ve both already been vaccinated against Hepatitis A&B, so we’ve only got those two other infections to worry about.

I read up on vaccines and learned that they often trigger Lyme symptoms in patients who thought their Lyme was gone, or at least was in remission. The same is true for Chronic Fatigue Syndrome and Fibromyalgia patients. I decided to get the vaccines well in advance, just in case. I went to the travel medicine doctor expecting something bad to happen.

After I got the dose, my throat started to feel constricted. I got very congested in my sinuses and bronchial tubes. Instead of a Lyme flare, I feared I was having an allergic reaction. I asked my husband to drive to the hospital so I could sit in the parking lot and wait to decide if it was getting worse or going away. While we were there, Joe felt a lump in his throat and got a little congested. We decided, after checking my pulse (normal, not tachycardic) and my lungs (no wheezing), to go home and rest. We were both tired and congested the rest of the day, but that was it.

Next Saturday, I get my second rabies dose and my only dose of typhoid vaccine. I elected to get the injected version. The oral version is cheaper, lasts longer, and is contraindicated for people with immune problems or digestive tract problems. I’m not sure if it would be problematic for me to take the oral version, so I’m going with the less-is-more approach and taking the weaker vaccine.

In three Saturdays, I get my last rabies dose. Then I’m stopping the vaccine circuit for a while. I have one left to get, Tetanus, which I’ll do at my annual check up (the first regular doctor visit in several years) at the end of March.

I wonder if I’ll have a stronger reaction to the subsequent rabies doses or the other two vaccines. If not, I’ll go back to triggering Lyme with eggs.

I have a lot of resistance to testing new frequencies with the coil machine. First, I’m overwhelmed by the number of frequencies I think I should try. I have a two page list of the frequencies, along with the capacitor settings, taped to the wall above my coil machine. Sometimes, when I think I should test them to see if my body reacts, I psych myself out, trying to figure out which one to do first. That alone has paralyzed me for months. Second, I resist trying them because I don’t want to find out I’m going to have to spend another year, or more, coiling for other infections. From that perspective, it would make more sense to start sooner, but mostly, I don’t even want to face the possibility. Lastly, I feel like I have no time in the day to start coiling for a 4th infection. That is just too many. So I’ve been delaying for several months.

The time wasn’t completely wasted because I made major headway against Bartonella. Now, however, my coiling for Bartonella is more focused, as it is for Babesia. My coiling for Lyme is less frequent. And my plan to trigger the Lyme isn’t working quite the way I expected. Plus, I’ve been feeling washed out and generally unmotivated many days, with a recurring thought that another infection is eating away at me.

To get started, I changed my Bartonella protocol (see previous post) to free up 10 minutes of coil time in the middle of the day. I cut the amount of coiling on my sacrum and on the top of my head to five minutes each. These I do at night.

To cut through my own nonsense, I just picked the next frequency on my list: 690Hz. It is ostensibly for Mycoplasma fermentans, which I can’t quite imagine I have, but who knows. It is also listed as a possible Lyme frequency, and one of the general frequencies that gets used for tons of ailments.

Each day I pick where to coil. It seems almost random, in part, because it is. I don’t know that much about M. fermentans. What I’ve found online is confusing and contradictory. I’m flying blind here, or more accurately, I’m doing an observational experiment. I’m trying the frequency on a few locations to see what happens, just like I did at the beginning with Lyme and the other infections.

I felt a pressure in my upper chest, just below my collar bone as soon as I started the back of my head. It was mild but noticeable. It stayed at the same intensity level for the full ten minutes. That night, I had problems with concentration. The next morning my bowels were looser (what a relief from Bartonella!) the way they would get when 432Hz still gave me a mild herx.

I felt the same pressure in my upper chest, worse than Monday but not as bad as the worst of Tuesday. The pressure lasted longer this time, several hours.

I’ll continue to play around with 690Hz this week. I haven’t decided if I’m going to make it part of the daily coiling program or if I’ll test a few other frequencies, to see if a different frequency gives me a bigger herx.

In the past, I tried 310Hz for parasites. Nothing noticeable happened, neither feeling better nor herx symptoms. I haven’t completely discarded the frequency from my listed because I only tried it for one day.

This week was the first week in a while when my body weight didn’t increase by another pound. What a relief! I’ve become concerned about the never-ending weight gain. I decided to have my thyroid hormones tested. Many other women in my family have had low thyroid, at a far higher frequency than the 1 in 8 that women in the United States experience. No results yet, but it is on my mind.

I went to yoga for the first time in several months. Thirty pounds really does change the balance of a body. I was stiffer than before, but that’s expected from my increased muscle mass and the lack of stretching for so long. What was harder was all the extra body fat that I know I have but didn’t realize would change my positions. Just bending forward, I noticed I needed more room for my belly. Yoga felt different.

I’m visualizing being more active, prioritizing going for a walk, run, bike ride or yoga class every day. Most days, I think it will be a walk, but maybe some other exercise twice a week for starters. I don’t expect to lose weight through these activities, but I’d love to stop gaining it.

The same goes for my diet. I’ve cut way down on my carbohydrate intake, returning to my favorites: protein, vegetables, and nuts. I’m hoping that this will help even out my metabolism. 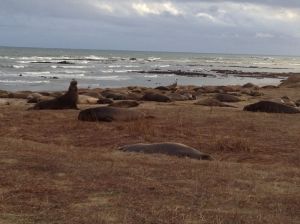 I had a moment to think about size this weekend. I went to Año Nuevo State Park on a guided tour to see elephant seals. A sizable number go there to breed in the winter (and to molt in the summer). The females weigh about 2000lbs when they arrive. Once on land, they give birth to a 60lb baby. Then they nurse for about a month, not eating the entire time they are on land, and mate before they get back in the water. The babies gain 140-190lbs in that month. Wow. They look like used cigars, lolling around on the beach, barely able to move by the end of the month. Meanwhile, there are 5000lb males guarding groups of 20 females with their pups as well as the weaned babies that got left behind. Alpha males fight hard to protect their harem from other males. It was quite a sight to see these huge animals with their giant fat rolls bumping against each other and biting each other’s flanks.