Forty years old. It’s an accomplishment. When I was in my 20s, 40 seemed old. In my 30s, my outlook started to change. For a few years in my early 30s, I wasn’t sure if I’d live to see 40. A review of my thirties might explain why I feel more triumphant about surviving than disappointed at what I haven’t accomplished yet (which some of my friends have expressed as they turned 40).

When I turned 30, I was excited to be moving back to NYC. My birthday party was blanketed with a blizzard that prevented some friends from coming and almost caused a cancellation of the party itself. I tried not to see it as a sign. By the time I was 32 1/2, I couldn’t walk, had a mysterious illness, was in an incredible amount of pain, and had no clue what was wrong. I wasn’t sure if I’d be back at work in a month or on my way to the grave. By 35, I knew I had Lyme Disease and some other tick-borne infections, I was taking loads of antibiotics, anti-fungals, and anti-malarials. I still felt incredibly sick. I wasn’t sure if I would ever be able-bodied again, but at least I was no longer acutely afraid of dying. When I was 37 1/2, I got married. It was an unexpected turn in my life. It was also around the time that things looking up, for real. Now, at 40, it seems like I might get my life back.

I started coiling when I was 36. If I had known what it would be like, I would have started much sooner. I don’t think that coiling has fixed everything. It might still fix quite a few more of the physical problems I have. But it has changed the trajectory my health and my life were on.

Now, at 40, the battle isn’t over. I still have one major infection to conquer. Victory seems possible. I’m not perfectly well. I wish I was. I haven’t reached a full and obvious remission of Lyme and Babesia. But I know what to do to get the symptoms to go away within a few days or a few weeks. That’s quite a feat. It’s quite a change from the fear I had of never getting better or the weeks and months of suffering with no end it sight. So the battle isn’t over. But I no longer feel like I’m losing.

I’ve announced to everyone I’ve spoken to that I’m celebrating all year long. Practically speaking, I’m doing the things I most love and planning to enjoy every moment. I’ve started a writing class online to work on a pet project that I’d like to see published someday. I plan to see my family a few times this year. Anyone I know who wants to visit me will find a free room to stay as long as they like.

The celebration has a theme, “What am I waiting for?” This is a big shift in how things have been for the last decade. I’ve had so many limitations on my energy, attention span, and physical abilities, that I’ve often had to postpone what I want to do until I give up on so many of those things. The things I’m thinking of include little ones, like calling a friend I miss, or big ones, like finishing the novel that I’m now working on in the class (or the Coiling for Lyme book!). Now, when I think of something I want to do, I start on it right away, rather than delegating it to a list to consider later in the context of everything I think I need to do. This is a work in progress. I still have limits to my time and energy and attention span. But I’m spending less time on lists and more time on action.

The celebration for my birthday included a wonderful Sunday on the the actual date I hit 40. I bought a party shirt at the local thrift store in the morning. I Skyped with my parents and my sister’s family. I went for a walk in Pacific Grove, right on the water. I ate delicious food on Monterey Wharf. I wrote a scene for my novel when I got home. I ended the night with an episode of Downton Abbey. It was so enjoyable.

I was able to enjoy it even more because I wasn’t in pain. I was cold. I still have the never ending respiratory infection. But that was nothing compared to the previous 10 years. 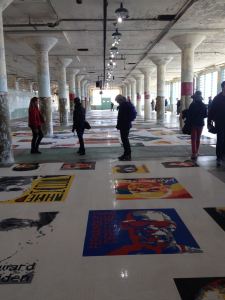 Ai Weiwei’s exhibit at Alcatraz, @Large. The floor is covered with portraits of political prisoners crafted with Legos.

The celebration continued the following Thursday. My husband and I went to San Francisco. We relaxed during the day. I met my good friends for dinner. Some of us stayed for a live performance by Sergio Mendes at the restaurant. The audience was invited to dance during the last three numbers. The next day we went to Alcatraz to visit the island and to see Ai Weiwei’s exhibit. It was moving and opened my mind in so many ways. More good food and an early night. Saturday, we went to the Marine Mammal Center, a hospital for pinnipeds. Another eye-opening experience. More good food, including homemade, eggless, almond gelato, topped off the day. Sunday I went for a bike ride (with some walking breaks to go uphill) and watched Downton Abbey. A pleasurable several days that make me feel like I’ve moved to paradise. My life isn’t perfect, but life is so much better than I imagined it could be during the terrible years.

View of the Golden Gate Bridge from Alcatraz

For the last ten days, I’ve been taking a Chinese herbal formula. It isn’t specifically for Lyme. In fact, I think the description I understood was a formula for illnesses that go on and on and relapse. There are some other herbs added to the basic formula that address the organs that are most damaged by Bartonella (kidneys, liver, heart). So far, the formula has made me herx for Bartonella, but the herx isn’t as intense as the herx I get from coiling. I have some kidney pain, worse some days, less others. I’m having a minor acne outbreak on my butt (as expected). I have intermittent constipation. And I’ve had some short, moderate headaches at night. I will finish this course of herbal treatment in another 10 days. By then, I’ll have started coiling for Bartonella.

I’ve also gone to an acupuncture clinic to try to get rid of the respiratory symptoms. It was rather humorous to hear the acupuncturist say that I should avoid cold, damp and wind…the day before I left for San Francisco! In fact, the way I would describe normal San Francisco weather is cold, damp and windy. Somehow, by the magic of global warming, the weather was dry, moderate and sunny. There was wind, but not so much.

The acupuncture has helped the symptoms diminish, but I haven’t crossed the finish line yet. I don’t even think I have and infection anymore. I just have leftover inflammation in my trachea. Meanwhile, I have a new symptom, the kind of crazy symptom I associate with tick-borne infections. I have a spasm in my neck/throat, on the right side, in the front. It is so painful. Advil helps take the edge off, but it doesn’t get rid of the pain or difficulty swallowing.

I expect to go for another treatment or a few this week to deal with these last two issues.

I haven’t completely stopped coiling. I’ve been coiling for Lyme once a week, on Mondays, for the past three weeks. I’m barely symptomatic. Really, the only thing I feel is a pain in my ribcage on the right side. That’s my harbinger of the Lyme infection becoming active. So I’m coiling. I’ve been expecting a return of symptoms at the end of the month. The last few days of January for the past few years have been when I get a big flare. So far, I only have the rib pain, at least in terms of Lyme symptoms.

I suspect that things might get a little worse this week. I’m prepared to coil twice a week for a while until everything calms down again.

Meanwhile, I have a fear that I didn’t completely vanquish the Babesia. I have hints. They are only hints, because they could easily be Bartonella symptoms. Fleeting light and sound sensitivity. A headache or two. Some heart discomfort.

What I think I should do, starting tomorrow and for a week, is to go back to the Babesia coiling protocol I used in the fall. If I get no herx, and the symptom frequency, intensity, and duration don’t change, I’ll stop there. If I get a herx, then I’ll have a lot of coiling to do in February.

I can tell I’m procrastinating from starting the Bartonella coiling. I just don’t want to deal with the herx it causes. In fact, it’s been nice not coiling everyday. I have so much more free time. Oh well. As I often say, the only way out is through. So I’m gearing myself up to go through again. This time I get to do it knowing that things get so much better when I coil. I no longer question whether I’ll get better. My question has become, How long till I reach the end?